‚ÄúGoing to confession is hard‚Ä¶. You do not want to make too much of your constant imperfections and venial sins, but you want to drag them out to the light of day as the first step of getting rid of them.‚Äù

This week‚Äôs Sunday cycle of texts brings with it a change in season, moving from the period of ordinary time after Epiphany to the journey of Lent. Having been reminded of our mortality on Ash Wednesday, we now walk with Jesus and the disciples toward Jerusalem and the cross that awaits him there. On that journey this week, we are confronted by the reality of sin and its remedy. END_OF_DOCUMENT_TOKEN_TO_BE_REPLACED

First Sunday of Lent
Luke 4:1-13
The dictionary defines marvel (as a person) as one who is wondrously astonishing. With apologies to Captain Marvel, this week’s gospel text reveals one at whom we should truly marvel, and beyond that, one we should follow.

We receive Luke‚Äôs version of Jesus‚Äô temptation in the wilderness filtered through Jesus‚Äô life, death, and resurrection. And it‚Äôs glorious. END_OF_DOCUMENT_TOKEN_TO_BE_REPLACED

Having Descended to the Heart

Once you have grown used to the incessant
prayer the pulse insists upon, and once
that throbbing din grows less diverting

if undiminished, you‚Äôll surely want
to look around‚Äîwhich is when you‚Äôll likely
apprehend that you can‚Äôt see a thing.

Terror sometimes sports an up side, this time
serves as tender, hauling you to port.
What‚Äôs most apparent in the dark is how

the heart‚Äôs embrace, if manifestly
intermittent, is really quite
reliable, and very nearly bides

as if another sought to join you there.

I‚Äôve often wondered what thoughts ran through Noah‚Äôs head as he stood at the door of the ark and prepared to disembark. When he surveyed the scene, did a holy expletive escape from his lips as he took in the devastation? As he took his first steps onto the dry ground, the din of animals and family in the background, was he overcome by the deafening silence of a planet whose slate had been wiped clean? Did the loneliness and isolation terrify him? What did he think of the God whose divine power and jealous anger had caused such chaos?

Alone in the wilderness, with only wild animals for company, it strikes me that Jesus, too, knew something about deafening silence and loneliness. Mark‚Äôs sparse storytelling doesn‚Äôt give us any of the details that Matthew or Luke‚Äôs gospels offer. There is no reported conversation with his adversary. There is no transport to the Temple mount. We are left to fill in the blanks for ourselves about the battle raging in Jesus‚Äô head during those long days and nights. END_OF_DOCUMENT_TOKEN_TO_BE_REPLACED

Lent begins with Jesus fresh from the waters of his baptism, being led by the Spirit into the wilderness.¬Ý At baptism, Jesus is reminded that he is called as God‚Äôs anointed, the Messiah.¬Ý But what kind of messiah is he going to be?¬Ý It is in the wilderness, where everything is stripped away, in prayer and fasting that Jesus seeks to clarify who he is and what he is going to do.

Satan, the Great Deceiver, shows up to steer Jesus away from God‚Äôs call upon him and uses three of the greatest temptations for those who want to change this world: economics/money ‚Äì turning stones to bread; religion ‚Äì spectacular religion which will make the crowds want to follow you anywhere; and politics ‚Äì to get the power to make things turn out the way you want. END_OF_DOCUMENT_TOKEN_TO_BE_REPLACED 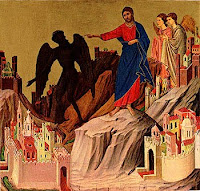 One of the interpretations of this text that I have favored in recent years is that Jesus resisted temptation to do even things that have good results.¬Ý If he turns stones into bread, he can feed the hungry people in the whole world.¬Ý If he gives his allegiance to the devil, the whole world will belong to Jesus in an instant.¬Ý If he jumps from the temple pinnacle, God will perform a flashy miracle, which could show people who Jesus really is.¬Ý This interpretation has served me well in the last few years, as I am person who is tempted to commit to or engage in too many things‚Äîespecially endeavors that will produce good results. END_OF_DOCUMENT_TOKEN_TO_BE_REPLACED