I remember well the days my two boys were born, one in September and the other in May, four years apart. When they were born, although we were obviously expecting them, they each decided to arrive earlier than expected and we were not fully prepared for their arrival. But their births, at least for this mother, were memorable. END_OF_DOCUMENT_TOKEN_TO_BE_REPLACED

Jeremiah offers a compelling vision: the people together, a great company, coming home. But the picture is all wrong. They seem to be marching triumphantly like a military party coming back from war. They move along the banks of the water in plain sight. But this is no army. This is a bunch of worn down and broken nobodies. And they seem to know it.

They walk back home through a curtain of tears. Forget those translations that say they come home with “tears of joy” (Jeremiah 31:9, CEB, NLT). The text does not say that. It simply says that they were weeping. END_OF_DOCUMENT_TOKEN_TO_BE_REPLACED

I’m the oldest of four lively children. As an adult I’m very aware of the strain that my siblings and I put on my parents. Raising children does not come with a “How To” guide and the four Wilson children found every kind of way to put parents to the test. Growing up, my father could often be heard to say in both frustration and resignation, “with you kids if it’s not one thing it’s another!” I suspect that something very much like this sentiment could be heard in the grumblings of the Israelites. As they left the Red Sea they immediately encountered a trial in the form of draught. The scarcity of water was overcome by the gift of Elim, where “there were twelve springs of water and seventy palm trees.”(Ex. 15.27) In Exodus 16 as the Israelites set out from Elim they are once more confronted by scarcity. This time it’s a shortage of food. As my father would say, “if it’s not one thing it’s another.” On the surface of the reading, the occasion for such grumbling is yet another occasion of lack. However, the real problem the Israelites face in the Wilderness of Sin is one of memory and identity. END_OF_DOCUMENT_TOKEN_TO_BE_REPLACED 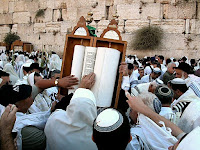 Over the last few weeks, the media has been abuzz with the news of Park 51, a proposed Muslim cultural center and mosque just a few blocks from ‘Ground Zero’ the site of the national catastrophe of September 11, 2001. The planned mosque has been met with a firestorm of opposition. Demonstrators have gathered along the proposed site to guard the memory of a national tragedy. The demonstrators frequently invoke Ground Zero as sacred ground and chant their protests while holding signs asking ‘Have you forgotten?’

Others have argued that those who would use the mosque have a right to public prayer and worship and that allowing Park 51 to go forward would be a celebration of freedom and thus an appropriate memorial for those who died in the 9/11 attacks. For our purposes, choosing a side is not as important as recognizing what both groups seem to have understood, namely, that memory matters. END_OF_DOCUMENT_TOKEN_TO_BE_REPLACED