“What house is it to which the Bible is the door? What sort of country is spread before our eyes when we throw the Bible open?”
-Karl Barth

The Lord God Almighty through the prophet Amos: “Seek me and live…. Seek the Lord and live…. Seek good and not evil, that you may live; and so the Lord, the God of hosts, will be with you.”

Jonathan Wilson-Hartgrove reflects on the murder of Trayvon Martin and the practice of reading Scripture–and being read by it–in Christian community.

The constant stream of news this week about Trayvon Martin has re-ignited a national conversation about race–a conversation that has been, in my estimation, neither this public nor this intense since the controversy surrounding President Obama’s former pastor, Jeremiah Wright, during the 2008 presidential campaign. The deep pain at the center of this conversation reveals a wound that we often try to hide, despite the fact that it will not go away. Our history of race-based slavery colors everything in America. President Obama was both honest and revealing, I think, when he said in a press conference last week, “If I had a son, he would look like Trayvon.”

Lent begins with Jesus fresh from the waters of his baptism, being led by the Spirit into the wilderness.  At baptism, Jesus is reminded that he is called as God’s anointed, the Messiah.  But what kind of messiah is he going to be?  It is in the wilderness, where everything is stripped away, in prayer and fasting that Jesus seeks to clarify who he is and what he is going to do.

Satan, the Great Deceiver, shows up to steer Jesus away from God’s call upon him and uses three of the greatest temptations for those who want to change this world: economics/money – turning stones to bread; religion – spectacular religion which will make the crowds want to follow you anywhere; and politics – to get the power to make things turn out the way you want. END_OF_DOCUMENT_TOKEN_TO_BE_REPLACED 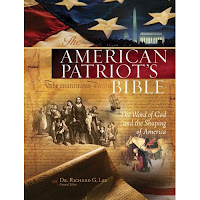 by Debra Dean Murphy
It’s a little surprising that it took this long but here it is, The American Patriot’s Bible, the latest in a long line of niche-marketed Bibles. (And one that really does take the cake in that literary sub-genre).

A mischievous review at amazon.com strikes just the right tone: incredulous irony. What else can you do but shake your head? Can we hope that the publication is about eight years too late?