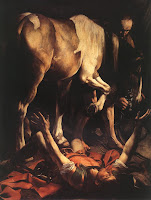 The conversion of Saul provides us with the New Testament example of a conversion experience.  Saul’s transformation from a persecutor of the Lord to an Apostle continues to serve as a word of hope to the sin soaked conscience of those who feel that truly their failings are too great to be forgiven.  The story of Saul’s conversion gives narrative power to the concept of being “born again” from John 3 or becoming a “new creation” from 2 Corinthians 5.

The power of this experience transformed the murderous Saul and immeasurably impacted the Christian faith.  Indeed powerful personal experiences of God have dramatically altered the direction of ‘the Way’ more than once. Remember that Luther shuddered under the righteousness of God until he came to understand the true meaning of the phrase, at which time he said “I felt that I was altogether born again, and had entered paradise itself through open gates.”  We can also call to mind the conversion experience of John Wesley who claimed his heart was strangely warmed and recorded in his journal “I felt I did trust in Christ, Christ alone for salvation, and assurance was given me that he had taken away my sins, even mine, and saved me from the law of sin and death.” (Italics original) END_OF_DOCUMENT_TOKEN_TO_BE_REPLACED

The sixth chapter of Isaiah concludes the opening section of the book with a vision of God and the calling of a prophet. In the year that King Uzziah died Isaiah is gifted with a vision of God in the Temple. The vision offers relatively few details of God’s appearance. All we are told is that the Lord was sitting on a throne, high and lofty and that the hem of his robe filed the Temple. The understated nature of this vision of God (compared to Revelation 1:12-16 for example), displays the challenge of describing God’s ineffable majesty.

Where Isaiah fails (rightly) to describe God, the text devotes more than three times as much space to God’s attendants, the Seraphs. The Seraphs are six winged angelic beings, likely serpentine in form, who eternally proclaim God’s holiness. Their only appearance in the Bible is here in Isaiah chapter six (although similar angelic attendants appear in Revelation 4:8). As servants of the holy God their other worldly appearance proclaims bodily what they also proclaim with their song; all who follow the triune God are called be holy as he is holy. The amount of space given to the description of the Seraphs should alert us to their importance for the preaching of this text. END_OF_DOCUMENT_TOKEN_TO_BE_REPLACED