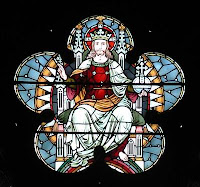 Some years ago, a friend of ours who was a major player on the Nigerian political scene nearly met an untimely death but survived. After confronting his mortality—his end, Takai abandoned his ascendant career trajectory and told his children that they would receive no inheritance from him. Their inheritance would now come in the form of a ministry he would establish to care for needy widows and orphans. Today that ministry cares for and brings together hundreds of Christians and Muslims in fractured northern Nigeria. Takai’s confrontation with the end unleashed imaginative energy for discipleship and ministry.

Admirable as it is, Takai’s story makes little sense to us because we believe something entirely different: it’s a world without limits that allows for creativity and life at its fullest.

“Your world. Delivered.” So boasts AT&T, would-be savior of the world. Through technology, such powers claim that we can possess all the world’s knowledge (omniscience), obtain all the world’s goods (omnipotence), and be continually connected to people everywhere (omnipresence). What we are being sold is a life of limitless possibilities. We can have it all, anytime, anywhere. We can keep our options open forever.

But while we celebrate seemingly endless opportunity, isn’t it paradoxical that we also feel trapped by our limits? We say, “I had no choice. I couldn’t help it. I don’t know what else to do.” Even as we boast of our freedom, we are also tortured by our finitude. We exercise very little creativity. Instead of living imaginatively, our lives are full of a sameness that betrays our lethargy.

Why does this paradox exist?

Among possible reasons is that our freedom is built on the interlocking myths of a global economy that can grow endlessly, a world of unlimited resources, and a security apparatus that can maintain these conditions.

In AD 90, the Roman Empire boasted of establishing a similar world order and deemed itself worthy of a new name—Imperium Aeternum. The “Eternal Empire” claims that what currently is, has always been, and always will be, forever and ever. Amen.

It is the role of an empire to erase any memory of anything that came before. Empires survive by creating a myth of being limitless. And by sustaining this myth, empires nullify any attempt to think of anything that could come afterwards.

It is the apparently limitless power of our modern day Eternal Empire that saps our capacity to live courageously. In a world without limits, the need for imagination has come to an end. How can we imagine or want more when we already have everything we want, when we already live as kings and queens?

The gospel tells us that what we see now isn’t the total reality. But we struggle to gain traction against such forces. We ought to be able to do more and do better as disciples, especially given that we possess so much. But we fight feeling powerless.

But instead of fighting against our finitude or seeing it as a sign of failure, what if we saw it as precisely the way God opens up for us to be faithful? Instead of assuming that we can do what is ultimate, what if we gave ourselves to embracing the basic, the flawed, and the provisional as the way forward?

Christ the King Sunday, at the end of the Christian calendar, gives us texts that speak of finality as an antidote to our boasts of ultimacy.

First, we jump into the middle of Daniel’s fantastic dream. Earlier Daniel saw fierce beasts representing four empires: a lion with eagle wings as the Babylonian Empire; a bear-like Median Empire; a leopard embodying the Persian Empire; and finally, the dreadful beast with iron teeth and ten horns standing for Alexander’s Hellenistic Empire. The last beast sprouts an eleventh horn that boasts about its god-like power.

But in contrast to the horn’s noisy arrogance, a solemn scene takes shape backstage. The main act is getting ready: a heavenly court where the Ancient of Days judges the four beasts. The first three are allowed to remain but have their authority taken away, but the fourth beast is put to death and burned up. Contrary to the illusions of an Eternal Empire, there will be a final judgment of every empire and nation. It will be final, not because it will happen at the end of time but because there is no court of appeal. The time of all empires comes to an end.

Then Daniel sees a vision surpassing even this dramatic courtroom scene. The Son of Man comes with the clouds of heaven to the throne of God to receive all authority and glory. All peoples will serve him and his kingdom will last forever. Talk about unlimited power and an eternal empire!

Fast-forward to Revelation 1, and we see that the Son of Man is none other than Jesus Christ, who suffered at the hands of another empire and yet was vindicated to become the ruler of the kings of the earth. He is the first and the last, King over the beginning and the end of history and Lord of everything in between. Final judgment, final authority, Christ is King not only at the end of time but here and now.

Contrary to the arrogant boasts of our current empire, God will bring its dominion to an end. There is a limit to how much power it has and how long it will possess that power because Christ is King.

But the proclamation that Christ is King is not meant to immobilize us in a new way. Daniel and Revelation could lead us to think that we are left with nothing to do but to hunker down until the end.

No. The vision of Jesus’ ultimacy is meant to give us confidence and energize us for courageous living in the present.

Jesus models this courage in his trial before Pilate. At first glance, it appears that Pilate holds all of the cards. Jesus has no room to maneuver. When Pilate and the empire he represents dominate, there is no room for imagination, only the narrow options offered by the world’s pragmatism. But when we recognize that empires and our own lives are limited, we are in a place to act imaginatively.

Jesus is able to speak boldly before Pilate and his empire because he does not hang onto the illusion of an unlimited life that is his to guard. Instead, he lays down his life in faithful submission to the Father.

This is precisely the opposite of what we so often think. We often think submission is the narrowest of options. But Jesus demonstrates that submission to the Father is vast because embracing our humility before God opens us up to options previously closed to us. Jesus, not Pilate, is the one with room to maneuver because he is not defined by all of the limitations of self-preservation and self-aggrandizement. Pilate is the one whose hands are tied. But Jesus is free—free to suffer, free to be misunderstood, free to die. That’s real creativity and true freedom. Joyful self-giving (and not any of the so-called alternative lifestyles) constitutes living outside the box.

When the ultimacy of Christ’s judgment grabs hold of us, we are in a place to see through the imperial deception of an unlimited life and learn that suffering isn’t the dead-end we fear. We can go through the basic, daily, and unremarkable practices of faithfulness without demanding that they assume noticeable proportions. When the vision of Christ as King drives us, we are in a place to live out our discipleship creatively.