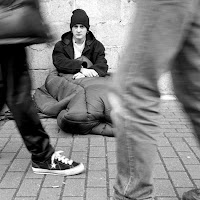 “What do you want me to do for you?” (Mark 10:51). It’s a striking question Jesus asks Bartimaeus—a beggar sitting beside the road when Jesus passes by; a blind man whose pleas of “Jesus, Son of David, have mercy on me!” could not be suppressed. What kind of answer was Jesus expecting? Bartimaeus is a blind beggar; does Jesus expect an answer other than the one that Bartimaeus gives? He wants his sight back!

But Jesus doesn’t give him his sight back. He replies to Bartimaeus, “Go, your faith has made you well.” Jesus only reveals to Bartimaeus that it was Bartimaeus’s own faith that made him well.

To understand this passage better perhaps we should look back at the reading just preceding it from the Gospel last week. It was in this Gospel that the disciples argue about who should sit at the right and left hand of Jesus when he comes to power and are taught once again that it is the first who will be last and the last who will be first. The passage just following this story is the triumphal entry into Jerusalem.

This is the reason that those crowding around the road are so stern with Bartimaeus. What is this blind beggar doing? Jesus is on his way to over throw the Romans and this outcast, sitting just outside of Jericho, is demanding his attention. Imagine the presidential motorcade going down the road and a bipolar homeless man yelling out for the president to help him. Everyone would tell him to shut up. And in this case that is what they did.

But Bartimaeus didn’t shut up. He knew that Jesus was his only chance and Jesus responds to Bartimaeus’s plea. “What do you want me to do for you?” It is an open question; a servant’s question. It is not the question of a genie, asking what wish he can grant. It is a question like that asked by a servant of his master. By asking this question Jesus changes the situation and shows his disciples exactly what he was just talking about, that the Son of Man came to be the servant of all.

What he says in response to Bartimaeus’s request also turns the situation upside down. He does not claim to have healed Bartimaeus. It was Bartimaeus’s own faith that made him well. In this way Jesus responds to both of Bartimaeus’s needs. He is not only made to see, but he is also freed from the situation of being a beggar.

Bartimaeus was an outcast, excluded from society, literally outside of the city. Jesus reaches out to him and brings him back, returns him from exile. It is as we read in Jeremiah, “With weeping they shall come, and with consolations I will lead them back” (31:9a) and in Psalm 126, “Those who go out weeping…shall come home with shouts of joy” (v.6).

We are told that Bartimaeus follows Jesus on the way. For most of those traveling with Jesus they are on the way to take hold of power, to unseat the Romans and take their place. With Bartimaeus we see that Jesus is displacing the powers, not to occupy their place, but to make room for a different kind of kingdom where blind beggars are asked, “What do you want me to do for you?”