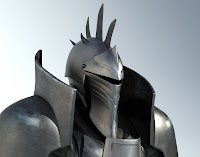 The culmination to Paul’s letter to the Ephesians has ample capacity either to thrill or repulse us. For those who already envision themselves locked in a mortal struggle against enemies of various stripes, Paul’s use of militaristic imagery fits and heartens. But for those who find the very thought of warfare hateful, even or especially against the demonic, this text chills and embarrasses.

But perhaps, in both cases, we get off on the wrong foot with Paul’s battlefield imagery. We begin with instincts formed by the kind of power that dominates our world instead of the power that fires Paul’s imagination. We can hear Paul’s exhortations to “be strong in the Lord” and to “put on the whole armor of God” much as we might hear admonitions from TV car ads that promise us that their vehicle will help us feel “safe in an unsafe world.” In this vein, Paul merely calls us to be strong in the way that we already know to be strong and to engage in more of the self-protective patterns we already practice. Since God was the one who provided us with our leverage, it follows that we must employ these sources of strength in our struggle.

But what I have often missed amid the more dramatic language of flaming arrows and cosmic powers is that the one who speaks of being strong is not an American whose life is secured by an empire or the economy. He is instead “an ambassador in chains.”

Ever since Inauguration Day, the American public has been fed a steady stream of images of Hillary Clinton jetting around the world and meeting heads of state and their populaces. From Baghdad to Mumbai to Abuja, she has announced the new administration’s message of change with a mixture of seriousness, charm, and moral superiority. But try imagining Hillary trading in her trademark pantsuits for a orange jumpsuit and her global jetsetting for house arrest, and what you get is an absurdity. Diplomats can’t project American power if they are prisoners. You can only talk softly when you carry a big stick, not when you are handcuffed.

But if this ambassador in chains commends being strong in the Lord to a frail and numerically unimpressive, socially marginalized 1st century Church, then he must calling into question our forms of strength.

Critical to hearing Paul is the fact that the armor is not merely supplied by God; it is the armor worn by God and His Messiah. Paul borrows images from Isaiah to depict how the Church is to clothe herself with the very character of God. Thus, the belt the Church fastens around her waist is none other than the belt of truth worn by the Messiah in battle. This is the truth revealed in the gospel that announces the end of the dark age of deceitful scheming and deluding lusts. To put on the belt of truth and the rest is to be clothed with the new self created in the likeness of God. To wear the whole armor of God is not to be strong in the way that we already know to be strong but to be strong in the way that the Jesus is strong.

Even more to the point, Paul’s exhortation to “be strong in the Lord and in the strength of his power” can only be heard in light of the power God employed in raising Christ from the dead and exalting him to His right hand. This is clearly not power in an any visible form we possess. It is nonetheless the power at work in the Church.

Perhaps when we try to appreciate that the power of the Resurrection is at work in fallible people like us and our fellow congregation members, we ascribe this power to the realm of the “spiritual” or “heavenly” because we cannot imagine how such power can be at work among earthy creatures like us.

Once again, Paul does not allow us to reach for what we are already so certain of. In mystery, this cosmic battle is taking place even as we engage in earthly, fleshly conduct. The battlelines drawn by Paul in the rest of Ephesians run through our everyday speech and relationships. The new self (a.k.a. the whole armor of God) we are to be clothed with looks a lot like telling the truth, sharing with the needy, and building up others through our speech. It looks like living in unity and reconciliation within our communities. The cosmic imagery at the end of Ephesians cannot be divorced from the earthiness of what precedes it.

Can such mundane and ordinary practices as speaking and acting graciously really be the expressions of cosmic power?

In an age of anxiety, we feel more subject to invisible forces than ever before and can instinctively reach for every available layer of armor and insulation we can. But the gospel Paul proclaims identifies our acts of self-protection as works of darkness, which ultimately do not make us safe. Though the powers and principalities seek to intimidate the Church into forsaking her holy calling, she can testify in the deceptively small acts of peace and generosity that these powers will not stand. Humility, gentleness, and patience look pretty feeble in a post-9/11 world until we recognize that these were the same armaments worn by our Risen Lord.

4 Responses to “What to Wear in Battle”