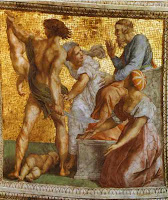 The Old Testament reading this week culminates the summer-long focus on the David cycle throughout I and II Samuel. We’ve followed David from his anointing by old Samuel while David was a young shepherd boy through his confrontation and victory over Goliath, his rivalry with and eventual succession of King Saul, his consolidation of power and making Jerusalem his capital, bringing the Ark of the Covenant to the city and his ecstatic dancing before it, to his adulterous and murderous relationship with Bathsheba, his confrontation with the prophet Nathan, to the death of his son Absalom while trying to overthrow his father. Finally, this week, we read the verse “Then David slept with his ancestors, and was buried in the city of David” (I Kings 2:10). Wow! What a story.

Now we turn to Solomon and the transitional materials marking the move from David’s kingship to Solomon’s and the move into the decline of this kingship which will continue throughout the rest of I and II Kings. To read all of the first two chapters of I Kings is like reading a political novel full of power, intrigue, manipulation, and violence. Perhaps more than a novel it is like reading a newspaper if we could read what goes on behind the scenes of what newspapers usually print. The first two chapters are shocking in their brutal honesty of how Solomon consolidates his throne over against his older brother Adonijah. One thing about the Bible, it doesn’t hold back on telling us the truth about power. This is not “Sunday School religion.”

Walter Brueggemann remarks that I and II Kings are written from the perspective of those sympathetic with the prophets. In other words, we’re not reading the press releases from the palace; we’re reading sermons from the pulpits out on the margins. From the perspective of the prophets and their plumb-lines rooted in Torah, Brueggemann suggests that the book of Kings might more appropriately be entitled “Kings?” Kings with a question mark implies that this is the story of how the kings lost their legitimacy. This is the story of the decline and fall of Israel. Like David’s story, these stories continue to ask us how much of these are our stories.

Then, also like reading today’s newspaper reports, we come to chapter 3 and Solomon’s prayer asking not for power or riches but for wisdom. We see a different side of Solomon; one marked by humility and honesty. This is the Solomon known best in Sunday School: the wise and humble king whom God blessed and made the richest man in the world.

So what do we do with Solomon and his prayer? The same Solomon who genuinely submits himself before God at the beginning of his kingship is the same Solomon who ruthlessly seizes power; the same Solomon who loves God also loves many foreign women. Do we cynically dismiss his prayer as an attempt to manipulate God just as he manipulates everyone else? The text, in all its honesty, is not skeptical about Solomon’s submissive prayer. Do we understand Solomon’s ruthless manipulations of power as blessed by God and that Solomon seeks to use ruthless means in order to rule for godly ends? Perhaps a surface reading of the text leans in that direction. But if we read it with “Kings?” in mind, it allows us to see a complex story of a real man, a real king, who both sincerely loves God and wants to do God’s will as well as having no qualms about ruthlessly using power. Maybe we are at a watershed moment in this great and tragic story of a king who will either become the ruler God calls him to be, one who follows the Torah and takes care of God’s people, or become a king who is like all the kings of the other nations, who makes and follows his own rules of power.

At this point in this story, we don’t know how Solomon will turn out. New administrations all start out with high ideals and a profound sense of vocation. But all administrations find out too that power is seductive and that goodness is not always as clearly defined as they once thought.

One Response to “Kings?”