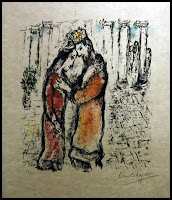 The readings for this week offer an odd combination of themes. Both the Old Testament and Psalm readings are quite clearly concerned with the fallout of the affair between David and Bathsheba (though perhaps rape might be a more appropriate characterization). The Gospel and Epistle readings however seem, at first glance to have little if anything to do with the first two readings. In the Gospel we hear about Jesus being the bread of life whom the Father sends down from heaven to give life to the world. In the Epistle we are reminded of the fullness of Christ’s gifts in and to the church, as manifested in the multiplicity of charisms and ministries which build up the body in love.

What, we wonder do David’s sexual exploits have to do with Jesus being the bread of life? Or the fullness of Christ as given to the church in grace? Much in every way, I think. What seems to be vital about reading these texts together is the way in which they speak to what it means for us to be the recipient of God’s abundant gifting. In the Gospel, the Epistle, and the Old Testament reading the experience of being the recipient of God’s gifts lies at the center. In the story of David, the Lord, seemingly speaking out of hurt as much as anger, declares “I anointed you king over Israel, and I rescued you from the hand of Saul; I gave you your master’s house, and your master’s wives into your bosom, and gave you the house of Israel and of Judah; and if that had been too little, I would have added as much more” (v. 7-8).

“I would have added as much more.” That is the drumbeat, the cadence of how God has dealt with David. David, the recipient of God’s utterly gratuitous gift-giving, of God’s infinitely underserved abundance, has responded with theft and murder to possess more. God came to give life abundantly. David stole, killed, and destroyed.

Perhaps this gets at why David says in his Psalm of penitence “Against you and you only have I sinned.” One is inclined to be a bit surprised at this way of putting things. After all, didn’t he sin against Bathsheba by using his royal power to have his way with her? Let alone his, umm, murdering of her husband who happened to be his loyal soldier. How then has this turned into something just between David and God?

Well, it hasn’t really. What is at work here is the way in which God’s abundant gift-giving sets the framework for David’s sin of violence and domination. What is at the root of all of the deceit, murder, and victimization that he has wrought is a refusal to trust and live within the arena of gift into which God had called and established David.

But here is the all-important point: that is precisely what is at stake in all our acts of rebellion against God. The endemic nature of our lives, bound over to the rebellious powers, is to strive to live outside the realm of God’s gifting love. We seek possession, domination, and the endless pursuit of our own satiation. What David’s story reveals to us is that this pursuit ends in death. Through it we murder, and because of it people suffer and die whether we intended it or not. Outside the realm of God’s gifting love there is, quite frankly nothing. Only loss, only privation.

It is in light of all this that Jesus’ declaration that he is the bread of life who gives life to the world takes shape. God has always been the God of superabundant gift-giving as the story of David shows, but in Christ God not only gives again, but gives exceedingly abundantly beyond all that we could ask or think. God descends, as the Epistle reading reminds us, into the lower parts of the earth. The furthest reaches of the nothingness that we effect when we reject God’s gifting love. Even in that place of rejection, the bread of life appears. In the fullness of darkness, captivity itself is made a captive, and gifts are given to us (Eph 4:8).

In his descent Christ liberates us into gift. And in so doing we are caught up to participate in God’s very own mode of life, the life of giving-in-love. Thus, when captivity itself is made captive, when we are liberated from our infantile refusal of gift, we are freed into the life of loving that is the church. This is the life of mutual service, of edification, of doxology. In Christ we are invited out of the self-enclosure of death and into the freedom of God’s cruciform agape. May we, like David, repent of our attempts to descend into domination and possession and embrace the liberation in to loving that Christ has wrought. Captivity itself has been taken captive. Therefore let us rejoice!

2 Responses to “On Receiving Gifts”