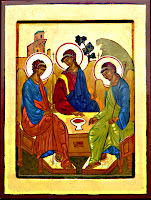 If you are a savvy and astute reader of Trinitarian theology who can elucidate the fine distinctions between, say, Augustine and Origen or Moltmann and Marshall or Zizioulas and LaCugna, you may or may not be up on the latest (actually, the only) treatise on the Trinity to capture the popular imagination: a little self-published tome called The Shack.

But you should be. Not because it’s a good book—it isn’t. But because, as indicated above, its sales are in the stratosphere. It is loved—fiercely loved—by an astounding number of Christians of all stripes.

The Shack has struck a chord, I think, because most people have not learned much about the Trinity from their participation in church life—or at least they think they haven’t. (“Trinity Sunday,” in an odd way, keeps the doctrine of God’s triunity remote, exotic, and “special”—something to be observed this one day of the year and expounded upon with clunky analogies).

But the Trinity permeates the church’s life and witness. When we baptize in the name of the Father, Son, and Holy Spirit, we name the Trinity as the church’s “determining reality” (Miroslav Volf). In the Eucharist, the gathered community “incarnates and realizes its communion within the very life and communion of the Trinity” (John Zizioulas). The justice, equality, freedom, and generosity that we seek to embody in our common life all have their source in the Trinity, in which “none is afore, or after other; none is greater, or less than another; but the whole three Persons are co-eternal and co-equal” (The Athanasian Creed).

People who read Augustine and LaCugna know this. But the people in the pews are reading The Shack. Those who love systematic theology—its beauty, order, symmetry—can critique this pop-treatment of the Trinity without breaking a sweat. But we (theologians, pastors, preachers, educators) have done a poor job of communicating how it is that all we do as Christ’s body the Church is shaped by the pattern of love-in-communion that exists among Father, Son, and Holy Spirit.

Until we’re able to communicate this in imaginative, engaging ways—that is, until we’re able to help others see (in worship, in preaching, in missions, etc.) that they already “know” what the Trinity is, people will go elsewhere for their theology; they always do. And while they may find fragments of wisdom and truth (as The Shack surely contains), they will have an incomplete picture, a distorted view, blurry vision.

And we will find ourselves, every year at this time, wearily dusting off that mysterious, ancient relic known as the doctrine of the Trinity, putting it on public display with a few corny examples to try and explain it, only to happily reshelve it again when the day is thankfully, finally over.

19 Responses to “The Trinity and THE SHACK”