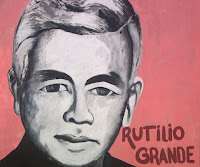 On March 12, 1977, Fr. Rutilio Grande, SJ, was assassinated along with two companions as they drove toward evening mass through the fields near El Paisnal, El Salvador. Fr. Grande knew where he was going. During his five years as parish priest in nearby Aguilares, he formed Christian base communities, trained lay “delegates,” and vocally opposed government attempts to silence Salvadoran priests who worked with and organized peasant laborers.

It was not a safe time. As Fr. Grande said, “It is practically illegal to be an authentic Christian in our situation because the world around us is rooted in an established disorder. Confronting that, the mere proclamation of the gospel is subversive.” Yet he had a larger vision: that of the Eucharistic table, the Lord’s Supper, which he described in a homily not long before his murder as, “the greatest commitment, the symbol of a shared table, with a seat for each person and tablecloths long enough for all creation.” “For this,” he added, presumably aware of the costs and demands of discipleship, “redemption is needed.”

When Fr. Grande’s friend, Archbishop Oscar Romero, drove to see the bloodied body of his fellow priest, he, too, understood at last what road he was on. Romero later wrote, “When I looked at Rutilio lying there dead I thought if they have killed him for doing what he did, then I too have to walk the same path.” Three years later, on March 24, 1980, his path ended in much the same way: assassination while celebrating the Eucharist.

“No one has greater love than this, to lay down one’s life for one’s friends.” Dying for one’s friends, like Jesus’ commandment to love one another as he loves us, seems an impossible demand. Absent grace, it is.

Near the end of the movie, Romero, the Archbishop, played by Raul Julia, is deeply troubled, confused by impossible demands placed upon him as shepherd of a vulnerable flock in dangerous times. Alone on the road by Fr. Grande’s grave, he falls to his knees and prays four, short sentences:

This is the way of love described in John’s gospel, nothing at all like love in songs and stories. We can’t love others as Jesus loves us. Even so, we are chosen rather than choosing, named friends rather than slaves, and told to ask everything of the Father in Jesus’ name rather than labor in futility and ignorance. For this, redemption is needed.